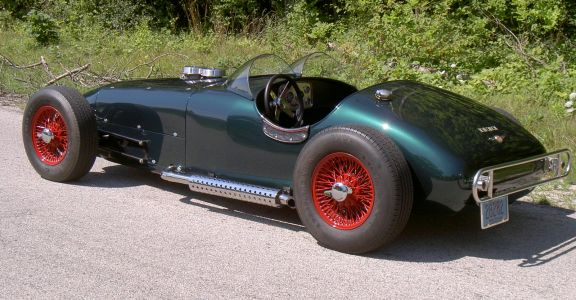 Wally Troy was the first official Jaguar dealer in the state of Illinois. And he was a gifted craftsman with a big dream. The dream was to build a street legal race car and he achieved this in 1959 with the remarkable Troy Roadster pictured here.

This car is a true one-off, the only car ever built. A fantastic design featuring a carefully handcrafted aluminum body. The car resembles clearly the European open wheel racers of the 50’s with almost no overhang on the front or back. The drive train is Chevrolet.

It carries a tubular frame and belly pan which spells out racing right there.

This extremely handsome car has been featured in the 1960 Hot Rod Magazine (article included in photos) and also was also shown in a period Comic book (also shown).

The current owner seriously “hunted” for this car and was finally able to purchase in 1975. The car was stored for almost 20 years before a full restoration was started.

The car has been meticulously restored and has since been shown at the 2004 Amelia Island Concourse as well as the Detroit Autorama. The car is stunning in appearance and extremely fast.

A true piece of American history and a wonderful addition to any collection of sports cars.

The car is in the US.

Hand made Aluminum Roadster from 1959! A piece of American History!
Price: SOLD
Back to List Contact us All advertised information is believed to be true but not guaranteed. We assume no liability for errors or omissions.